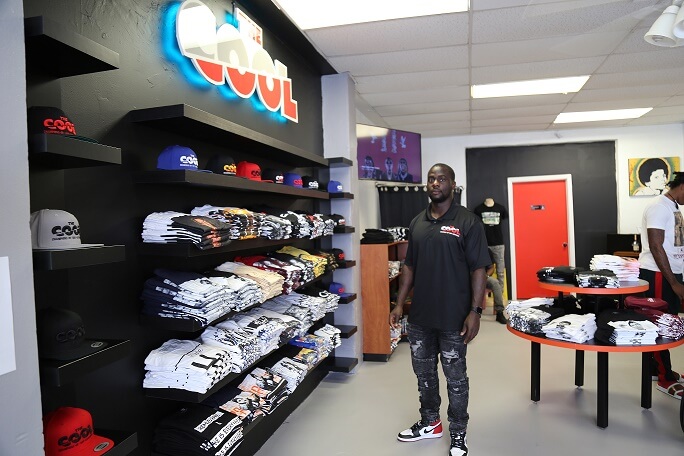 Everyone wears T-shirts. Eric Wooden aims to make people look cool in them.

Wooden, 29, is the founder of The Cool Miami, a clothing brand that specializes in urban graphic T-shirts. After five years of selling T-shirts out of his 1999 Ford Focus, Wooden opened his first standalone shop, The COOL, in Liberty City on Feb. 9.

“I came back to my [old] stomping ground,” said Wooden, who graduated from Miami Northwestern Senior High School in 2006. “I could’ve put it anywhere, but why would I want to put it anywhere?”

Wooden’s journey wasn’t an easy one. After dropping out of William Penn University in Oskaloosa, Iowa in 2007 and a brief stint at Miami Dade College, Wooden found work at a warehouse and a post office to survive.

He found himself in a state of unfulfillment until 2013 when, during a conversation with a friend, he realized his life’s calling was to produce T-shirts.

“I can’t just work for thirty years of my life looking for a retirement check,” Wooden said. “I have to work for myself.”

That drive led Wooden to pursue his love for drawing, something he discovered through comic books. After three months of dabbling with various designs, Wooden sold his first T-shirt. For the next five years, he continued selling the shirts out of his car.

Wooden tried getting his merchandise into stores. After presenting his line to a number of retailers—and a number of rejections—he received a yes from Cool J’s and Simon’s Sportswear, with his shirts appearing at all of their locations.

During that time, Wooden also enrolled in a 5-week, 10-session business management and successful marketing course sponsored by the Miami Bayside Foundation. His stellar participation led the Foundation to grant him a $30,000 loan to start his business.

“They did a hell of a job,” Wooden said. “[The courses] made me open up my eyes and look at the business world different.”

Michael Sellinger, the loan programs director at the MBF, says the credit goes to Wooden.

Wooden’s mission is to create a stylized look that conforms to current trends while also making a statement. His shirt designs have messages like Racially Profiled and D.O.P.E – Dollars Over Poverty Everyday. Others feature the images of cultural icons like Mike Tyson, Tupac and Scarface.

“I have to see what event is going on in the world, what season it is, what color,” Wooden said. “It comes into one category.”

With his politically-inclined clothes, Wooden hopes to engage both adults and children in his brand.

“My clothes are not just for adults, I also make them for the younger generation,” Wooden said. “When they can speak to both parties, you’ll win.”

His newfound success has also renewed Wooden’s interest in education. Wooden currently takes classes at theCarrie P. Meek Entrepreneurial Education Center and at North Campus. He is pursuing a degree in business administration and plans to graduate in December of 2018.

“I had two goals in life: to get the store and get the degree,” Wooden said. “I got one, now imma (sic) get the other.”

With his store now open, Wooden is jubilant. He is currently expecting a son with his girlfriend and has expanded his brand to include hats and jeans, with The COOL’s customer traffic higher than Wooden expected.

“I’ve been in the game five years. They know who I am—they just come in,” Wooden said. “It didn’t really hit me until the first customer came in. That’s when it hit me, like, ‘Wow, this is for real.”