Mrs. Canessa-Gonzalez has over 30 years of experience in Finance, and over 20 years within the banking industry; both overseas and in South Florida. After starting her career at the International Trade desk of a large bank, Mrs. Canessa-Gonzalez found success as a turnaround agent in growing community banks, overseeing system conversions and process overhauls.

Born in Buenos Aires, Argentina, Mrs. Canessa-Gonzalez moved to New York shortly after graduating college, and settled in Miami in 1997.  She has served on the board of directors of the South Florida Banking Institute since 2007.

Sonia Canessa-Gonzalez received her undergraduate degree in Economics from Universidad de Buenos Aires and a Master of Accounting from Florida International University. 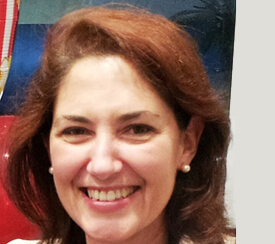