Mr. Binns served in the Miami-Dade County Mayor’s office where he was responsible for policy, legislative affairs, and special projects for a portfolio including Management and Budget, Procurement, Information Technology, and Human Resources.

He has also served as the Interim Manager for one of Miami-Dade County’s municipalities. Former Assistant Port Director of PortMiami.

Basil is currently the, Deputy Director for Administration and Business Development and Retention at the Miami-Dade Aviation Department (MDAD) since March 2022. 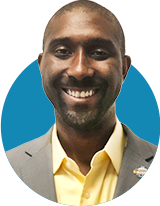